Their music is based around the songwriting of the band’s founding member, guitar and keyboard virtuoso, Tuomas Seppälä.

Amberian Dawn have released four studio albums since 2008 and during these years they have toured in Europe three times with bands like Epica, Van Canto, Tristania.

In 2013 they released a re-recorded compilation album Re-Evolution with their new singer, Capri.

Their new album Innuendo was released this October on Napalm Records.

I spoke to Tuomas about touring with the band, new songs from INNUENDO and the influence of Queen:

Congratulations on your release of INNUENDO. Are you feeling proud of the recording?
Do you think that the new songs are still influenced by Finnish and Norse mythology?

“I don’t write any lyrics for AD but I know that Capri isn’t using mythologies as topic so much on our new songs. The songs are lyrically more fantasy based nowadays. Also some traditional themes like ”love” and ”hate” as far as I know.”

What has it been like touring with Delain & The Gentle Storm ?

“Well, I liked the tour and especially I liked all Delain members. It seemed like they’re liking our music too and maybe that’s why we got a chance to tour with them. All kinds of things always happens on road..but you probably know an old saying — what happens on road stays on the road”

“The most exciting show on tour is always the very first one. That’s when you’re first time on stage with a new crew and all technical things aren’t perhaps going so smoothly yet.”

How do you deal with routine comparisons with the previous singer? (After all, it is the second studio album with Capri and yet folk are still talking about Heidi Parviainen.

“I’ll let people compare our singers with each other if they want to. I still don’t feel like I should anyhow defend our new singer or something…I know that Capri is a perfect choice for us at the moment. Some of our old fans don’t like her but seems like the majority of our old fans are loving her too. It’s still true that you cannot please everyone no matter what you’ll do. You just got to believe in yourself and believe that the choices you make as composer and as a band leader are the right ones.”

We believe that new songs, such as “Fame & Glory”, “Ladyhawk” and “Innuendo”, are catchy, perhaps lighter and more pop than ever before. Is that something that the band has deliberately set out to achieve?

“When I’m composing new songs, I never set myself any goals..instead I just let myself go and everything what comes out, comes out naturally.I don’t want to force myself doing any certain kind of songs. It’s just happened lately that some part of my music is been more pop-rock orientated. It’s nothing planned. But at the same there’s still a lot of songs with more ‘traditional’ AD—elements too…speed and heaviness are present in different songs.”

It’s even been argued, by some, that this album sounds like a ‘new beginning’ for the band?

“I also feel like this album is a new beginning for AD. There’s been a lot of changes in the past and for a couple of years now things seem to be just right and we’ve grown together as a solid band. This new beginning also means that I’m going to be even more bold to do different kinds of experiments with different kinds of music in the future too. You cannot expect AD to sound exactly same on all studio albums. Something new is always on the table.” 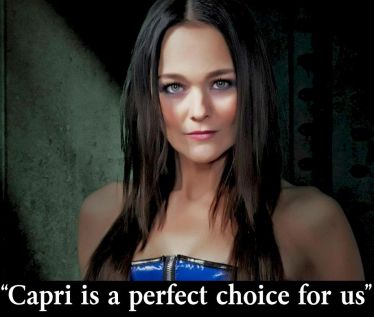 How much of this ‘fresh sound’ is attributable to the production work of Mikko Karmilla? Or are your compostions just becoming more commercially flavoured?

“Mixing engineer is the heart of album sound. Mikko Karmila is perfect guy for us at the moment for that job. He really gave our songs that certain final touch, which is magical. I’m really happy with his work. ”

“About my songs, it’s true that some songs are more soft and could also be described as ”commercially flavoured” but that’s just something I’ve been liked to do. That all can still change in a heart beat if I feel like it. It’s also possible that I’ll continue on this path which started already on Magic Forest album. Time will tell.”

We like the idea of “The Court Of Mirror Hall” — Do you ever feel caught between two opposing cultures and / or two contrasting genres? If so, do you think that the sense of conflict helps (or hinders) the artistic process?

“Yes, with some softer songs like ”The Court” I’ve been in the middle of heavy metal and pop music. But it’s fun to mix these two elements together and make something new of those. Some people are going to like it and some are not. I don’t want to think about the people’s reactions too much, I just make that kind of music I feel right.”

Finally, how much was Queen’s “Innuendo” album an influence on the Amberian Dawn album?

“Not so much but it’s true that I’m a Queen fan (like rest of the band too) and that’s why there’s some Queen- influences on all of our studio albums. Freddie was an amazing singer.”

Amberian Dawn were talking to @neilmach 2015 ©