The legendary “Blonde Bomber” Michael Schenker is best known as the guitarist with UFO.

He became famous as one of the first members of the Scorpions and is the younger brother of Rudolf Schenker.

The story is that the Scorpions went on tour, after the recording of their first album, opening for the upcoming British band UFO in Germany. During the tour Michael Schenker was offered the position of lead guitarist for UFO (replacing Bernie Marsden.)

Schenker briefly re-joined the Scorpions in late 1978, when they were recording their landmark album “Lovedrive.”

Spirit on a Mission – Michael Schenker’s Temple of Rock

Schenker has always been in demand as a guitar wizard. He auditioned for The Rolling Stones in the mid-1970s (following Mick Taylor’s dismissal.) He also auditioned for Aerosmith in 1979 after Joe Perry left.

After the death of Randy Rhoads, Ozzy Osbourne called Schenker to replace Rhoads, but at that point Schenker had already embarked on a solo career and had founded the Michael Schenker Group (MSG).

Schenker is is consistently ranked as one of the worlds greatest Heavy Metal Guitarists. He accepted his “ROCK GUITAR LEGEND” award at the Vegas Rocks! Magazine Music Awards in 2012.

Michael Schenker has released four albums with his Temple of Rock — the most recent being ‘Spirit on a Mission’ (2015.) [Reviewed in our October Print Edition available here: http://rawramp.me/get-your-printed-copy-sent/

RAW RAMP MUSIC MAG met up with Michael Schenker in London to talk about spirit, luck and loyalty.

So, does Schenker still feel he is a man on a mission?

“Yes, I am still on a mission. Spreading the joy of music from a place of pure expression. That’s me…”

Does he feel at his most commanding at this stage of his career? Does he feel as if he is at the top of his game?

“Yeah, it’s like this. If I look back now I can see clearly that my life came in three stages: The first stage was when I unconsciously made my musical contribution to the world (in the Seventies) — Well, it was created in the Seventies — but it was for the Eighties, really. When I worked with my brother on ‘Lovedrive’ they took over and simplified what I did… ”

“And it’s more like an education because they were performing for the ‘wide mass.’ So they were out to make it simple for the ‘wide mass.’ And that has been going on for 30-40 years. It’s basically been an educational thing. With the hope that people pick up an instrument and become musicians themselves. It understanding what music means and the power of the universal language. ”

“Everybody has a space and a place where they’re good. But I kind of fearlessly go and express — I cover new ground — though, you can only express what you have… nobody can express for you. So that’s what I do. That’s my part. That’s where I feel happy.” 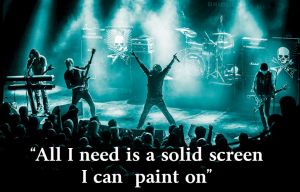 “I don’t listen to music for 43 years. And I don’t copy anybody since I was Seventeen. It’s purely coming from here.” [He touches his heart as he stares at me with bright eyes.]

“And that was the time of the second stage for me. When I gave my brother (Rudolf) my black and white design (Lovedrive) and he asked me if he could have “Coast to Coast” (it was co-written but I gave it to him) and the “Holiday” intro was also written by myself (but I gave it to him) because he wanted to be successful in a commercial way. And for me, it was all about developing as a great guitarist. So his vision was that way (he points to the door) my vision was that way (he points to the heart of the building.) He had that jump-start. I opened door in America for them, so they could go and do what they wanted to achieve.”

“Meanwhile, my middle years were about experimenting with guitar. Getting to areas that I hadn’t been to before. And then in the ‘later’ middle years I focussed very much on personal development.”

“Then in 2008, In the Midst of Beauty I felt like something was happening. I felt I was ready for something, you know? I never enjoyed being on stage — and yet all of a sudden I had the urge to be there. ”

“So, to re-cap, in the first stage of my life I developed something (unconsciously) I didn’t know it would have such an impact on everything. But now, in my third stage, I can consciously enjoy what was created and also — because it has been 30-40 years of education — I can take things now (on the guitar) to the next ‘playing level’…”

So it was a metamorphic process for him?

Does Schenker think he is loyal?

“Well, it’s like this… I always say that the The Universe is like the train driver. I just sit in my compartment and do my thing. The train ( Universe) is going to go where it wants anyway… I can’t stop the train. But I can decide what I wanna do in my compartment. So I thought: “It’s time for me to make a new record.” I went to Michael Voss’s recording studio (who I knew through Gary Barden) and I put down some music that I had and asked him if he could help me with it. He was singing along to it. I said, “Hey! You can sing! Why don’t you sing on this?” And that’s how that happened. ”

“And then I was jamming with Herman (Rarebell – drums) in Brighton and Pete Way was there (bass player) — they heard the demo and said they wanted to become the rhythm section… And so, I didn’t have to do anything, you know! Before I knew it I had all these incredible musicians… In fact I even got a phone call from William Shatner’s agent (asking if I would play on his album) and I said, “Hey! If you do the introduction to this album, I will play on yours!” So I got Captain Kirk to speak on my album! Unbelievable! ”

“So then, I was gonna go on tour. So all of a sudden Michael Voss was unavailable. So I was thinking “ Oh My! How am I gonna do this?” So I used Doogie White (who was on the recording, also.) And at about the time of the Europe tour Pete Way got sick and I asked Francis (Buchholz) if he could play. He said, “Maybe we could play a few Scorpions songs.” And so we did. ”

“Of course, when we went into the studio to start recording Spirit on a Mission it was almost effortless. It just all came together. I had a very precise concept. I design everything. I got it ready for Doogie (White, vocals) to hear so he can become inspired by it. And I asked Wayne (Findlay, guitars and keys) to come forwards because I wanted to use more 7-strings. So now, with Wayne involved, we have an addition to the song-writing team (it’s not just Doogie and myself) — we also have the 7-strings involved. ”

“Temple of Rock is still using the Michael Schenker platform. And the idea is to make Temple of Rock stand on it’s own feet. With it’s own identity. And with it’s own unique sound. So that’s how I developed this. Step-by-step. Without losing the essence of my being. ”

So will the singer Doogie be on the next tour?

“Yep! Doogie White, ex –Rainbow on vocals. Plus the original rhythm section of the Scorpions. Francis Buchholz and Herman Rarebell. ( Incidentally, Herman Rarebell wrote “Rock You Like a Hurricane.”) And then we have Wayne Findlay (who is now an additional song-writer)”

Does Schenker believe he brings new music because he because he delivers it from his heart and soul?

“Definitely. I write from within. That’s why it’s the ‘Temple’ of rock. I have a concept and all I need is a solid screen I can paint on (which is the professional rhythm section.) ”

How does Schenker think that younger audiences will approach his ‘classic rock’ sounds?

“I don’t know what they are doing. It’s a different generation. They are processing things so quickly and differently. They had a different upbringing. I think that they just fly though life in speed-time. At light speed. Because they have to process things so fast. I will leave it to them. That’s not my concern. ”

“All I need to do is be myself. There is nothing else to it.”

Yes, it really was that cold today 🎃 never too cold for shorts, though 😁