We meet in London’s Soho on a bright afternoon. Beth Hart is looking confident and eager — her eyes flickering with interest and expectation

We have been listening to her compelling new album ‘Better Than Home’ and we wanted to know what her own thoughts about it were.

“Its a very, very different type of record for me… from what I have done in the past” She tells us.

“Especially when it comes to the narrative … And it’s also different in the way that its more focussed (musically) and when I say that, I mean that it’s not so genre-bending. It’s not ‘all over the place’ like a lot of my records are.” 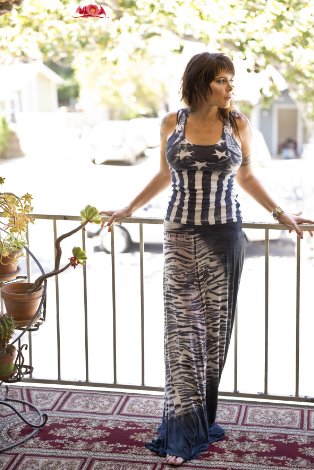 Are her records ‘all over the place’?

“I love to do a lot of genre-bending in my records because that’s how I like to write… But on this record the producers were very, very focussed on my strong-suit which they believe is that I’m a songwriter and they wanted me to dig deeper into my vulnerability — instead of hiding around stylistic-wise. At first I didn’t know what they meant… For example, if I sing a rock song I feel so strongly about it … in fact any song that I am singing I feel really into it — otherwise I wouldn’t be doing it. But they said, in their opinion, they just felt that when I write a song like “LA Song” or “Light On” it means something more. They particularly loved the writing about pain.”

“So I said to them — I don’t wanna make another record like that at all. But the producer said, ‘Listen, just have a little faith in yourself… get to work … do not co-write…Just dig and see what happens.’ So I turned in a lot of material. In fact I turned in well-over forty songs. And in that mix I was still trying to convince them ‘lets do a jazz record’ or ‘lets have some hard rock…”

It must have been hard…

“It was really frustrating, it was really hard. And at some point I realized what I was really afraid of. And that was that I was afraid to stand in my own voice.”

“I figured that if I stood in my own voice — and I was rejected by my fanbase or by a new gathering — then I wouldn’t have anyone to blame it on. I was really scared of that.”

“And I think that because I became aware of that… it made me angry. Then I told myself, ‘Lets face the fear and do it anyway.’ Because, at the end of the day, it’s not like the worlds gonna stop spinning if I’m rejected for who I really am or for what my voice really is at this time in my life. ”

“So I had to stop taking myself so seriously and just trust in the process.”

So did Beth feel more valiant now that she had gone through the process?

“Well, actually, I feel very surprised. I feel suprised that I have so much joy and faith in me.” 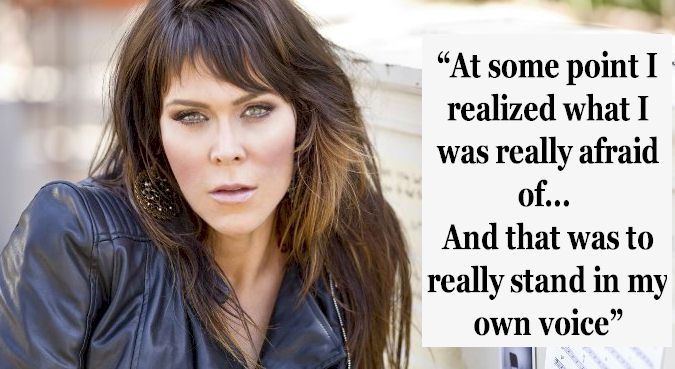 “Yes, and I realized that [with the making of this record] there was a part of me that has a lot of faith. And trust. And hope. And I do see how beautiful it is to be alive. And it was interesting to see how scary that was… To talk about and to sing about. And to put that out there. But after that whole process was done, well… It was the most difficult experience I have ever had (making a record) by far!”

How long was the process?

“It was a year and a half of working with the producers before we ever went into the studio. It was just me turning-in song-after-song-after-song.”

“And now, the funny thing is, (and this is why the title is so perfect for this record) this process has helped me choose a new path in my writing. This is something else. It’s a new way of looking at life. And at the medium — at what I can do with that. I learnt that there is also healing and joy to be had. And it’s OK to have joy. And it’s scary because now there’s somewhere to fall.You can’t fall when you’re in sadness. You are already on the ground.”

So what has been Beth’s desire as a writer?

“Well, once I get past all my denials — which keep me from the truth — and I catch it and I find it — and the song is finished … my immediate desire is ‘May this get to people – so people can help me feel that I’m not nuts.’ ”

“Like I’m not the only one that feels this way. And I think that that’s the end-all desire. I love it when I get a clap and I realize that the audience gets it. That I’m not alone.”

Isn’t ‘Better Than Home’ kinda sad. Doesn’t it mean that Beth cannot retreat to a loving place when she feels tired, lonely or starved?

“Well, no, it doesn’t mean that to me. But its interesting you say that because my sister Susan who I love dearly (we are very close) called me up and she was so angry that I had been talking badly about the family and I was saying that where I am now is better than home. But although I felt sad that she felt that way, and sad that she didn’t trust my intentions, in fact it made me understand — even deeper — what that title means. To me it means: Facing that fear. Facing the darkness — then jumping straight into it. Jumping with blind faith. Then seeing that you are surrounded by the greatest light. That you could not have found unless you went into the dark. And that’s what ‘Better Than Home’ is. It represents something that is so much better than I ever could have hoped it would be.”

So what happened to the remaining songs? Just eleven of the songs (out of a possible forty plus) made it to vinyl…

“Well, the songs that are left over either change or they go through a new metamorphoses… Or they stay as they are and find the record that they are meant to be on! ”

“If they don’t find the record to are meant to be with, them maybe they worked just privately for me. And I really trust that, if they find their way, then they were meant to…”

We wanted to know if Beth felt vulnerable when she wrote.

“I have always felt this way in my writing. But I think that, on this record, it is so much more-so. It was very uncomfortable — but I felt vulnerable in the light (instead of vulnerable in the dark.) And being vulnerable in the light is way-more scarier! But, as we know, it is more fulfilling. But the promo tour, so far, has been interesting because I have not gotten such good feed-back before. And, like I said, it was 7-days in the studio and many weeks of mixing ( I chose not to be there for that mixing … on the first day of mixing I hated it so much!) I even started pulling myself out of it. I backed out and I said to my husband, my manager and my label ‘There is no way I am releasing this record… I’m just not gonna do it.’ It was more fear. It was me still feeling unable to stand in my own voice.”

“But then when I heard the final result I thought ‘Well, it doesn’t suck!”

Is she her own worst critic?

“I think I am my own worst everything. But then I can be my own best friend too! I hope for those moments to come more regularly.”

The track ‘Hold On’ reminded us of the primitive grasper reflex — it’s the need (in all of us) to grab onto something. We asked Beth what she grabs onto for security.

“Well, God first. And my husband second. And especially during the process of writing this record. I even started going to church. Which I had never done since I was a little girl. I pray and I read the bible (it gives me so much hope) but I felt I was still searching for some power that was so much greater than myself (and I was getting so self-destructive) and I felt that I was getting lost — all over again. So I joined this awesome litttle church right around the corner from my house. So it proves that making this record has been a spiritual journey as well.”

Does Beth feel that she is a socially confident person?

“It really is up-and-down. It’s funny, but when I’m not on the road — it’s true — I am not confident. I won’t leave the house. I am totally home-ridden. I cook. I plant in the garden. I hang-out with the dogs. And I write. If I need to go out shopping — or feel like I want to go out to eat — I feel totally good if my husband is with me. But if he’s not with me, then I won’t go.”

“But on the road, there is a whole different armour. It’s a security. I don’t know what it is, and I could analyse it, but I think I should be really grateful for it. When I’m on the road I can go down the street. For myself. I can get myself a coffee. I can say hello to people.”

We told Beth that ‘Better Than Home’ captivated us and we are already suggesting to our readers that it is one of the finest albums of the year.

“This is where I realize that the closer you get to being yourself the better things can be…” She said.

One thought on “Interview with L.A. Singer/Songwriter BETH HART”